The Archaeological and Ethnographic Museum in Edirne seems to be one of the more enjoyable and well organised among many local museums we had the opportunity to visit in Turkey. Exhibitions are well described, although unfortunately some information is provided only in Turkish. Collections are presented in a variety of ways: chronologically, geographically, and thematically. The garden surrounding the museum is also worth recommending, as it includes one of the most fascinating and unique exhibits - a dolmen from the village of Lalapaşa Hacılar.

The first Archaeological Museum in Edirne was opened in 1925 on the order of Atatürk. It was based in Dar-ül Kurr'a Medrese, a part of the 16th-century Selimiye Mosque.

The collections of this museum were enriched with some valuable works from Ankara Ethnography Museum and Topkapı Palace Museum in Istanbul. As the result of this increase and due to the rich cultural heritage of Edirne as the former capital of the Ottoman Empire, the need arose to open another museum, presenting the preserved heritage of the Ottoman era. Dar-ül Tedris Medrese was restored, and the ethnographic works were moved to this place as the Ethnography Museum. It opened the doors to visitors in 1936.

During their existence, both museums accumulated such a significant number of exhibits and attracted so many visitors that it was necessary to establish a larger and more modern institution. As a result, in 1971, the Archaeological and Ethnographic Museum was opened in its present location. The architect of the new building was İhsan Kıygı. Currently, Dar-ül Tedris Medrese houses the Museum of Turkish and Islamic Works.

The museum is divided into two main sections - archaeological and ethnographical. Some of the larger exhibits are displayed in the garden of the venue.

The museum presents mainly, though not exclusively, the finds from the area of the European part of Turkey. The exhibits that attract much attention include petrified parts of animals, including an elephant and a rhinoceros, discovered in the mines of the region. The oldest ones date back to 35 million years ago.

Archaeological finds that testify to human presence in the region begin from stone, bone, and terracotta objects from Middle Neolithic and Early Chalcolithic Eras (7400-7300 years ago). They were found during the excavations of Hoca Çeşme tumulus in Edirne Province. In addition, the museum has some interesting exhibits from the Urartian and Hittite periods. 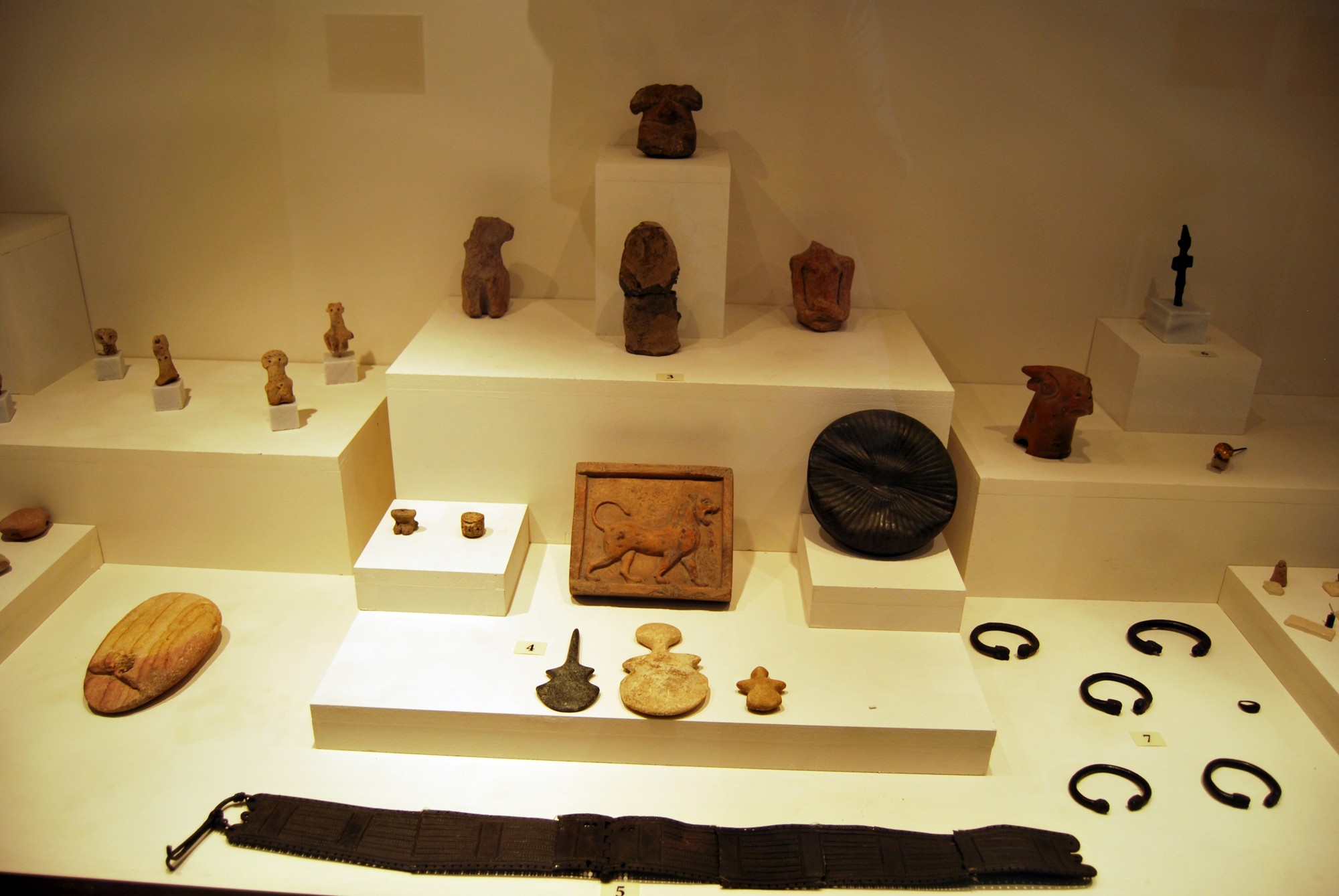 The other part of the collection consists of Thracian exhibits, mainly bas-reliefs and ceramic vessels. They include the finds from Taşlıcabayır tumulus, now in Kirklareli, Lalapaşa Arpalık dolmen, and Çömlekakpınar - Ikiztepe tumulus near Edirne.

Numerous exhibits are from Enez (Aenus), an ancient Greek city in Thrace. They were found during the excavations conducted in 1971-72. Among them, one can see ceramic vessels such as amphorae and hydriai but also figurines and terracotta statuettes from the 6th and the 5th century BCE. Moreover, Classical, Hellenistic, Roman, and Byzantine periods are represented by stone, bronze, terracotta, and glass works. A beautiful statue of Aphrodite, found in the Enez Necropolis, is a striking example of terracotta cult statues. 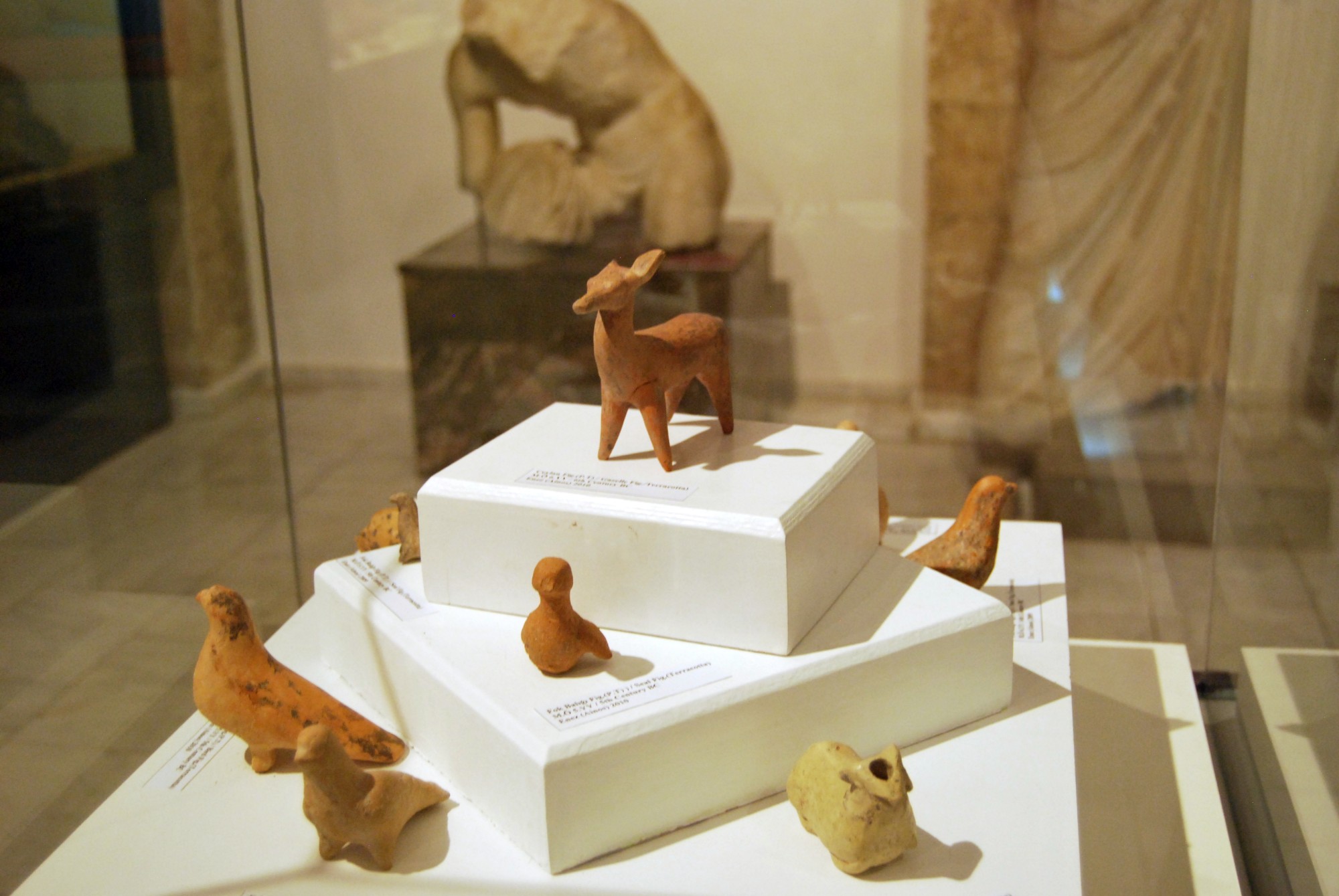 During the excavations carried out at Clazomenae (modern Urla near Izmir), an ancient Greek city, many terracotta sarcophagi were unearthed. They had a form of painted coffins with their rims and covers ornamented with geometric patterns as well as hunting and fighting scenes. These sarcophagi, from Archaic and Classical periods, were called "Clazomenian sarcophagi" after the place they were found. There are two sarcophagi of this kind in the museum, found during the excavations in Enez. 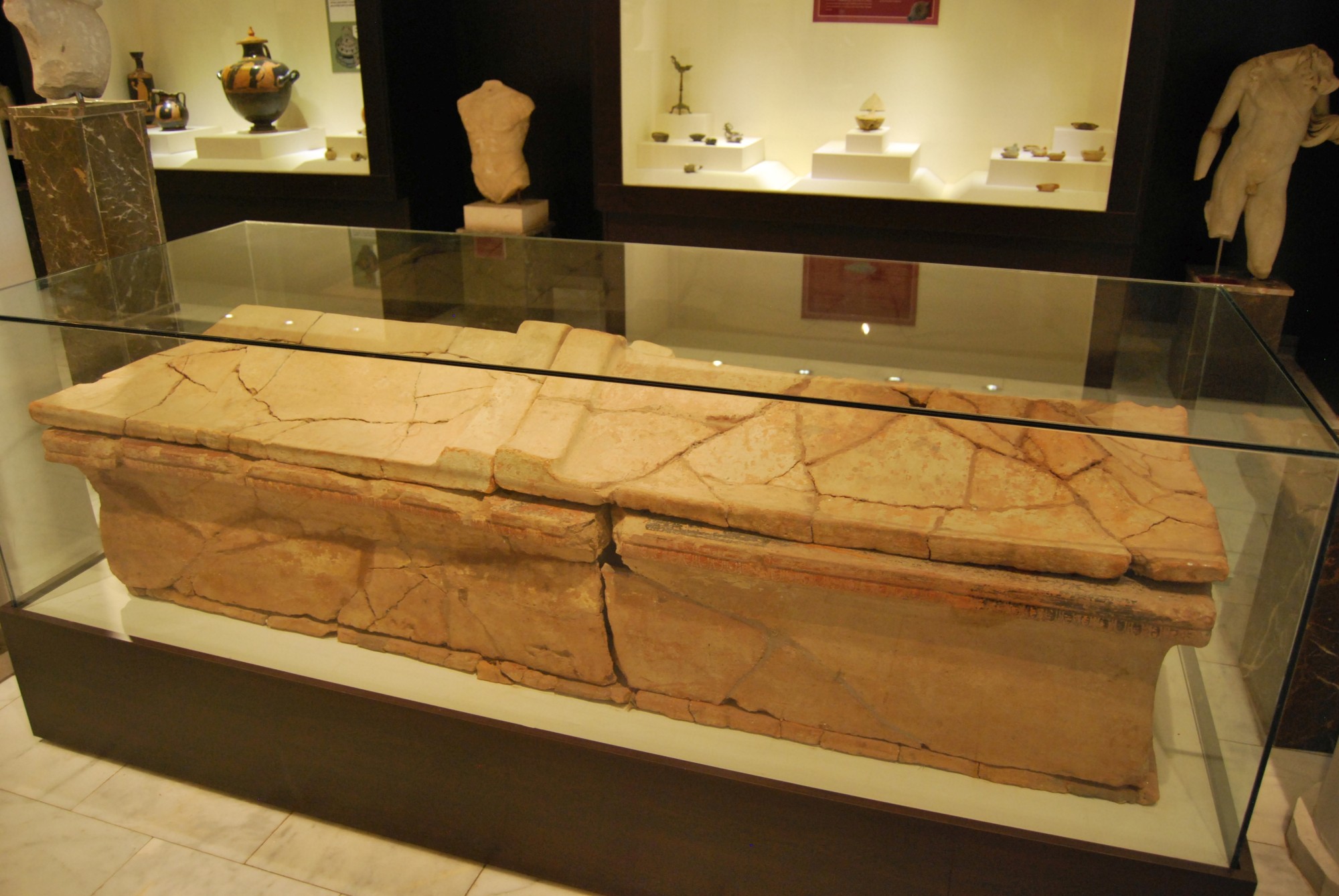 There are numerous Roman-era objects in the museum. They are inscriptions, statues, and an interesting fragment of an altar from Vize.

The visitors fascinated with the Ottoman history will undoubtedly enjoy the ethnographic section of the museum as Edirne was the capital of the Ottoman Empire for 90 years. The ethnographic exhibition reflects the former splendour of the city.

At the entrance, there is a collection consisting of silver works and other household objects, donated by an inhabitant of Edirne. Next to it, there are Gördes-type prayer rugs and Şarköy kilims from the 19th century. The coins from the period of the Ottoman Empire are exhibited in the first of the three showcases in the same line. The treasures found during the archaeological excavations conducted in Edirne are exhibited in the second showcase, and the coins confiscated from the smugglers and brought to the museum are exhibited in the third showcase.

The interiors of several rooms from this era have been recreated, including a Turkish bath and a living room. The most exciting elements of the museum include the ritual circumcision room and the bride room. Other exhibits include traditional clothing, weapons, coffee brewing pots, and ceramics. Among the most curious pieces, there is a kilim - a flat tapestry-woven carpet - from the Old Mosque (tr. Eski Cami) in Edirne. There is also a collection of writing materials. The local clothes are unique to the Balkans and shed light on the ethnographic identity of the city. A section devoted to Mustafa Kemal Atatürk includes a blanket he used during his visit to Edirne, and the map he had during the Balkan Wars. 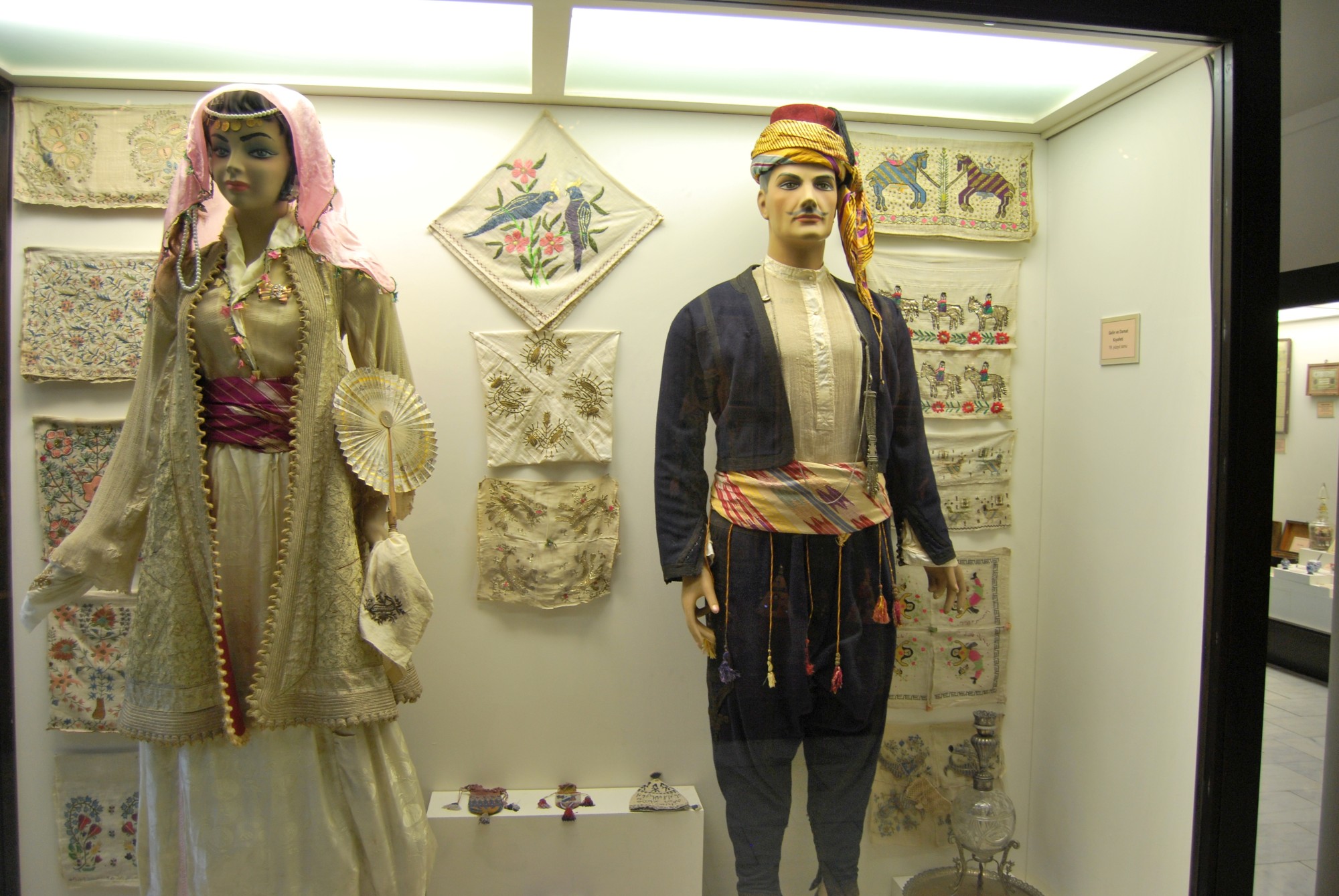 There are also splendid examples of the decoration technique known as Edirnekâri that involves painting wooden objects, such as drawers, chests, doors, ceilings, and cabinets. The technique was developed from the 14th century to the 19th century. Most popular motives of Edirnekâri are floral ones, such as a tulip or a hyacinth, carnation, fruit, geometric patterns and Islamic shapes. The Edirnekâri large door from to the end of the 17th century, placed on the wall of the ritual circumcision and bride rooms, is one the most beautiful samples of its period. There are also money drawers, writing desks, and chests made with Edirnekâri technique.

The Hacılar Dolmen and menhirs exhibited in the garden are the examples of many of these structures that can be seen in eastern Thrace region of Turkey. The general belief is that the Thracian dolmens date back to the transitional period between the Bronze and Iron ages, i.e. the years 1400-800 BCE. As a result of surveys conducted by Professor Mehmet Özdoğan and his team, 118 dolmens were identified and documented in 1998. 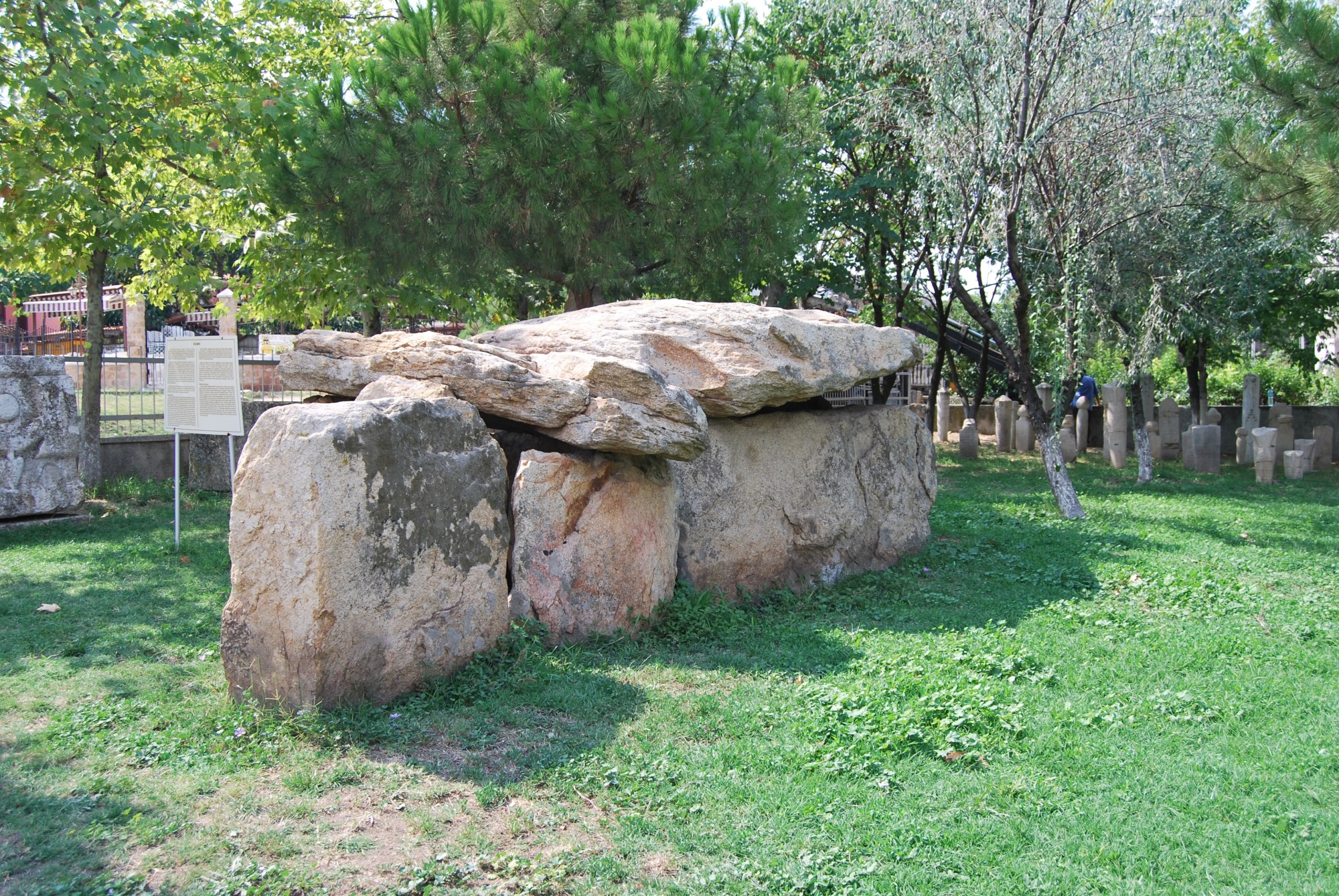 The Hacılar Dolmen, displayed in the museum's garden, was found during the excavations in Turkish Thrace, carried out by the Edirne Museum Directorate in 1983. The Hacılar Dolmen is made of local shale stone. It consists of two rooms. The first room has a plan close to a square and the second one is rectangular. In the section separating the chambers, there are passages similar to half-circles. The circumference of the dolmen is surrounded by large stones in the form of a ring. Two large ceremonial vessels were found nearby the dolmen. One of them is dated to the Late Bronze-First Iron Age transition period, corresponding to Troy VII b2 layer.

In the garden, there are also Roman period sarcophagi, Ottoman period grave stones, and Janissary tombstones. These tombs are unique as the Janissary cemeteries in Istanbul were destroyed after the Janissaries were disbanded by Mahmud II in 1826. Only a few graveyards in Edirne survived this destruction. For this reason, the tombstones exhibited in the museum are very rare and valuable. 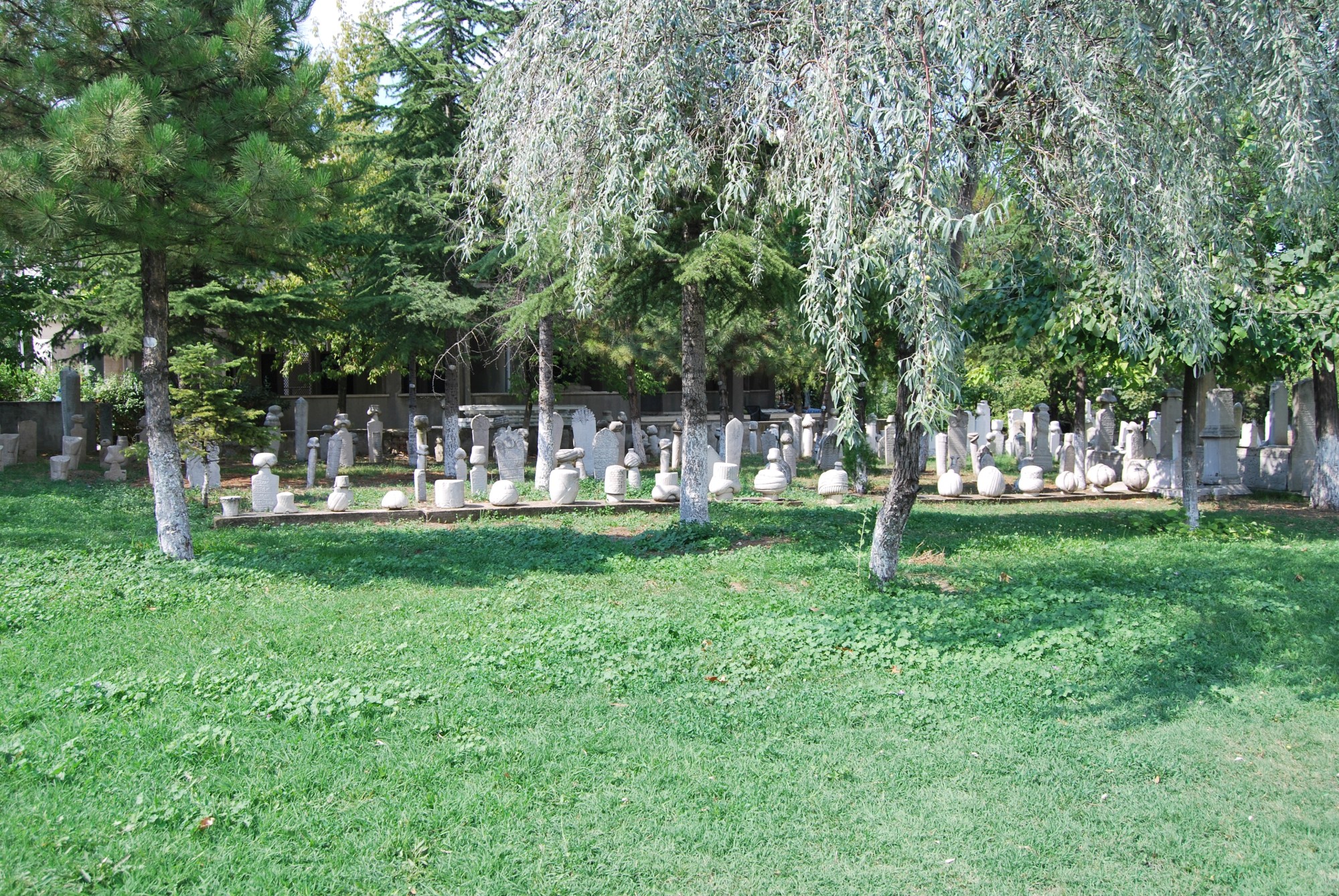 On the right side of the garden, there is a marble altar with Eros from the 1st century CE. The column capitals from Hellenistic, Roman and Byzantine periods are displayed on the garden wall.

The museum is in the centre of Edirne on Kadirpaşa Mektep street. It is easy to find at the back of the Selimiye Mosque, opposite the exhibition of the Janissaries' tombstones.